Hello Programmers, as you know nowadays the Scope of Mobile Devices has increased a lot and every day new apps are being published on Google Play Store and App Store.

Solution to this problem is Flutter. In Flutter, you can write a bar code and run it on both Android and iOS.

Flutter is basically a Mobile App Development Framework.
Which has been developed by Google company. It was first introduced in May 2017. Flutter Cross supports plateform. Meaning you can create Android, iOS or Web App by writing a bar code.
Flutter is a mobile app development SDK. Where SDK means Software Development Kit.

Where Flutter is used?

Flutter Dart is the framework of programming language. Dart is also a cross plateform language. If you create your app in Flutter, you can compile the same code for both Android and iOS simultaneously.

How to learn Flutter? 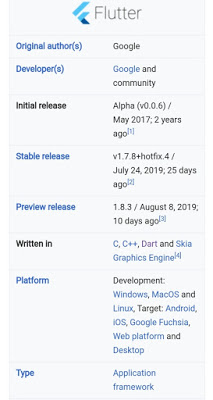 So to learn Flutter, first you have to learn Dart Programming Language. If you have previously worked in a programming language, then you can learn Dart very easily. Its Syntax C is similar to JavaScript and java.

There are many benefits to using Flutter. Some of them are discussed below.

Some Apps made in Flutter

Friends, hope you liked this post and you must have got the answers to your questions that What is Flutter, How Flutter works, Benifits of Flutter.
But if you still have any questions about Flutter, you can comment and ask me. I will definitely answer your questions.
Tags
Web Master
Bu yayınları beğenebilirsiniz
Yorumlar
Uyarı:
1.Yorum yaparken saygı çerçevesin'den çıkmayın
2.Küfür Hakaret Siyasi propaganda içerikli yorum yapmak yasaktır.
3. Her ne şekilde olursa olsun, özel iletişim bilgilerinizi paylaşmayın, fark edildiğinde kesinlikte silinecektir.
Yorumlar
Daha Yeni Kayıtlar Önceki Kayıtlar
Table of Contents
Paylaş
Takip et ©
Bulunduğum sosyal paylaşım platformları!
Yorum Listesi
Translate